Sharon Wright is an author, journalist and scriptwriter.
Based in London, England. 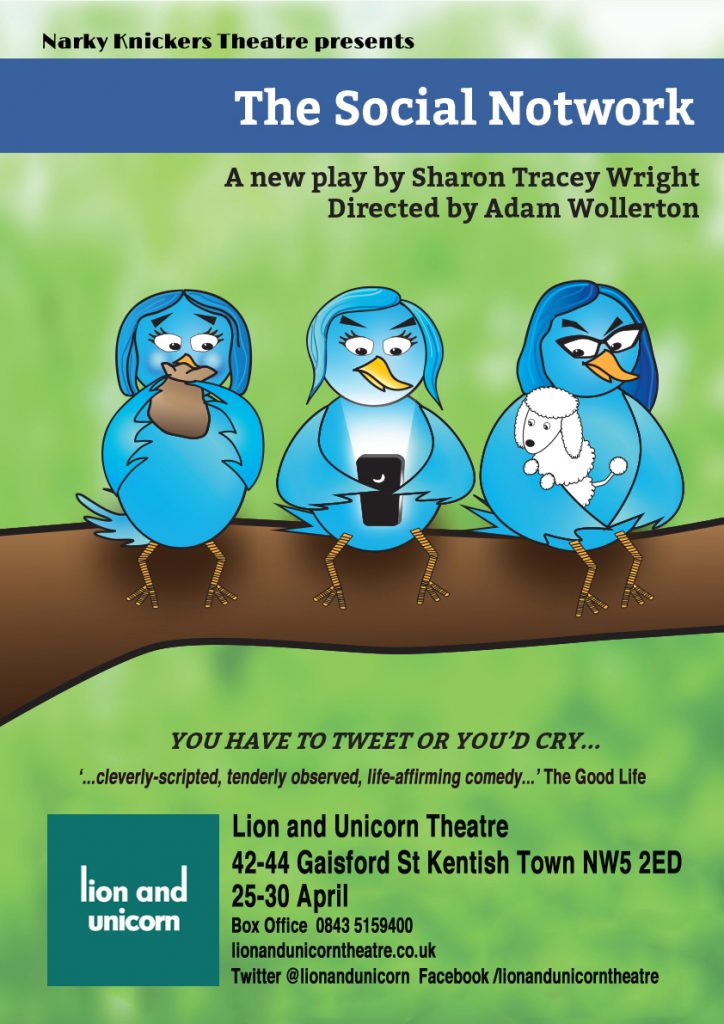 ★★★★  ‘Warm and enjoyable’
If David Croft and Jimmy Perry were still writing sitcoms then it might look something like The Social Notwork … Wright’s characters feel as though they belong in a long-running series… you want to tune in next week to find out what happens next. The Reviews Hub

★★★★ ‘Excellent.’
A well written and enthusiastically acted piece with superbly rendered characters… the comedy flows: there are no contrived jokes or one-liners, and it all proceeds as if spontaneous from the relationship between the friends. Everything Theatre

★★★★ “Good old-fashioned fun at its best”
Welcome to the crazy, mixed up world of The Social Notwork. There’s a real whiff of classic humour with a nod to the late, great Victoria Wood’s Dinner Ladies too with the down to earth Northern lasses. With super-sharp writing and acute observations… this play is high on fun and a real laugh out loud treat. London Pub Theatres

You have to Tweet or you’d cry… When they lose their jobs Karen, Marie and Mel decide desperate times call for desperate measures. So they’re going digital to get off the dole. Hey, what could possibly go wrong?

Following a sell-out run at RADA Studios at The Camden Fringe 2015, Narky Knickers Theatre has just completed a successful, critically-acclaimed 2016 run at the Off West End Lion and Unicorn Theatre. Watch this space for transfer news!

The Social Notwork nails the zeitgeist, bringing you all the belly laughs from refusing to go belly up. Whether they’re fuming at a funeral or pushing a poodle up a tree in a panic, these feisty friends fight to survive redundancy in a very funny and truly topical tale for our times.

Enjoy an evening of fabulous entertainment
brought to you by Narky Knickers Theatre.

‘Friller’ is a comedy ghost story written by me and directed by Adam Wollerton. The play is inspired by the astonishing story of Miss Lily Cove, the daring aeronaut and female parachuting pioneer who died in mysterious circumstances at Haworth Gala in 1906…

I first came across Lily’s extraordinary story as a cub reporter on the Keighley News back in 1992. Lily is said to haunt the Old White Lion Hotel, where she spent her last night, in the heart of Haworth – aka ‘Bronteland’. Now her tale of derring-do is brought to life in a light-hearted drama that pays homage to that heroine from Haworth history, ‘Leaping Lily’.

Friller had its premiere at Haworth Festival 2014 and was staged as an immersive performance at Ponden Hall at Halloween 2016. See here…

This is the cast of my first play Full Fat, a winner of the 2013 oneACTS festival of new playwriting at the cornerHOUSE theatre in Tolworth, South West London.

The sell-out comedy, superbly directed by Adam Wollerton, is about fun-running, friendship and food.

Actually, the cast of Full Fat are top centre. They are the fabulously talented Chloe Parsons, Sally Scott, Dawn Cato and Jade Coles.

Who are these other lovely people? They are my local Slimming World group, who rocked up to watch the show – led by our venerable leader Justine ‘Busty Justy’ Garnett (bottom row, third from left). I call her the Billy Graham of Slimming.

‘You do know SW are also my initials?’ I said.

There’s a lesson here. That lesson is this: never think you can go on a diet discreetly if you insist on writing a play about it.